The nutrient level of the plant is monitored by measuring the electrical conductivity (EC) of the liquid fertiliser in the growing media. There are many ways to measure the conductivity and nutrient level, and the results of different methods and instruments may vary greatly.

Growers usually use press water from the substrate to measure conductivity. In practice, this means waiting for about an hour after fertigating and then squeezing the growing media to obtain a sample (one sample from  multiple pots). The probe of the conductivity meter is placed in the sample and the meter displays the results. Most conductivity meters display the results in milli Siemens per centimetre (mS/cm).

Usually, conductivity measured in this way varies between 0.8 and 4 mS/cm, depending on the irrigation method, plant, stage of growth and substrate composition. Some meters use the measuring unit of micro Siemens per centimetre (µS/cm), whereupon the results are thousandfold compared to the mS/cm results (in other words, about 800–4,000 µS/cm).

Some meters also use or offer the unit of Deci siemens per centimetre (dS/cm), whereupon the results are a hundredth compared to the mS/cm results (in other words, about 0.008–0.04 dS/cm).

In addition to measuring conductivity from press water, there are various other methods for measuring the nutrient levels and conductivity of the growing media. Usually the meter is the same as the one used in the press water method, but the sample is processed differently before the actual measuring. This means the results are different.

These types of measurements conducted by growers are usually called the squeeze method or the press water method. In these methods, the substrates are irrigated normally with a liquid fertiliser. After irrigation, the grower waits about an hour and then squeezes the substrate for a press water sample which is measured using a conductivity meter.

The official press water measurement (EN 27888) is conducted by adding distilled water to the substrate sample until the litre weight of the sample is 550 g. After a waiting period of  24 hours, the sample is squeezed and the squeeze out moisture  is measured. The values of the official press water measurement are slightly higher than the results of the usual measurements conducted by growers, but the difference is not significant.

Press water measurements, both official and on-site, use the measuring unit mS/cm.

Growing media suppliers must report the nutrient levels and acidity of the growing media on the packaging and in documentation in accordance with the official EN standard.

The sample is prepared by taking 1 volume part growing media and adding 5 volume parts of distilled water. The sample is mixed thoroughly and lleft for 24 hours, after which the conductivity is measured from the suspension.

Cultivators in the Netherlands, a country known for its flowers, have used the so-called 1+1.5 method for measuring conductivity and acidity for a long time. Relevant literature and publications of Dutch scientists and research institutes often refer to this method, and conductivity and pH values are nearly always reported using this method.

Conductivity values measured in a laboratory

As the processing of the sample reveals all the soluble nutrients in the growing media, including soluble nutrients retained in a convertible form, comparing the figures directly with the press water results is difficult.

Therefore, the figures of the growing media analysis corresponding to the 0.8–4 mS/cm press water values fall between 2 and 10 10xmS/m.

Acidity of the growing media

pH measured with the 1+1.5 method follows the pH value obtained with a press water measurement. 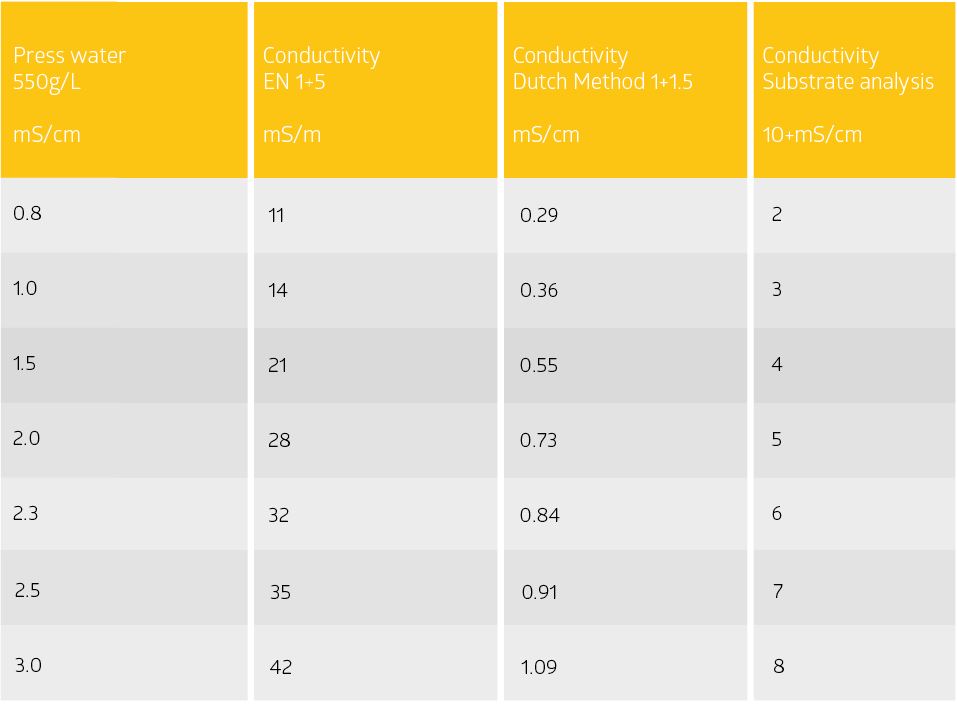 How to control strawberry taste

How can the farmer influence the taste of the strawberry? This question often comes up...
Read more

How to prevent phytophthora

Plant health is not only important for yield and overall plant quality. Healthy plants are...
Read more

How to choose your substrate for raspberries

With the development of tunnel cultivation technology, the cultivation of raspberries in containers has increased...
Read more

We use cookies on our websites for necessary functions, for saving user preferences and for statistical and marketing purposes. Some cookies are related to services provided by third parties. By clicking “Allow all” you consent to the use of ALL cookies. By clicking “Necessary cookies only” you consent only to cookies that are needed for our websites to function properly. You can also visit Cookie Settings to provide a controlled consent.
Necessary cookies onlyAllow all
Cookie settings
Cookie settings

Select the categories for which you allow the use of cookies. Some are necessary to help the website work properly and are always enabled.

Necessary Always Enabled
Necessary cookies are absolutely essential for the website to function properly. This category only includes cookies that ensures basic functionalities and security features of the website. These cookies do not store any personal information.
Functional
Functional cookies help to perform certain functionalities like sharing the content of the website on social media platforms, collect feedbacks, and other third-party features.
Analytics
Analytical cookies are used to understand how visitors interact with the website. These cookies help provide information on metrics the number of visitors, bounce rate, traffic source, etc.
Advertisement
Advertisement cookies are used to provide visitors with relevant ads and marketing campaigns. These cookies track visitors across websites and collect information to provide customized ads.
Others
Other uncategorized cookies are those that are being analyzed and have not been classified into a category as yet.
Save & Accept
Powered by