Sometimes, in certain temperatures, water condensates between the peat bale and the plastic wrapping creating conditions that allow fungal growth. You may see white mould or yellow or orange powdery like growth on the surface of the peat. These fungi are not harmful to plants.

The white mould is Trichoderma. It is a naturally occurring beneficial micro-organism that lives in most soils. Usually you cannot see its presence, but sometimes it appears as white mould on the surface of peat.

Yellow or orange powdery like growth on the surface of peat is due toPeziza ostracoderma, commonly called as cinnamon or peat mould. It is another non-harmful but common saprophytic fungi found on peat. Saprophytic fungi live on other fungi in decaying organic material such as peat. They do not live on living plants.

Due to low pH and low oxygen levels that are natural to bogs, plant pathogenic micro-organisms are not present in our raw material. They have never occurred in our analyses. There is no need to sterilise the peat. Heating would kill the beneficial Trichoderma, and on the other hand, sterile growing media would attract harmful fungi and enhance their growth as there would be no micro-organisms, such as Trichoderma, fighting them off. 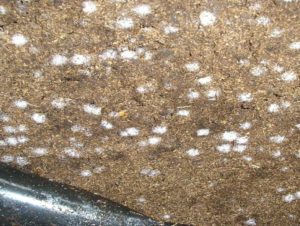 What to do, if there is mould in peat?

How to control strawberry taste

How can the farmer influence the taste of the strawberry? This question often comes up...
Read more

How to prevent phytophthora

Plant health is not only important for yield and overall plant quality. Healthy plants are...
Read more

How to choose your substrate for raspberries

With the development of tunnel cultivation technology, the cultivation of raspberries in containers has increased...
Read more

We use cookies on our websites for necessary functions, for saving user preferences and for statistical and marketing purposes. Some cookies are related to services provided by third parties. By clicking “Allow all” you consent to the use of ALL cookies. By clicking “Necessary cookies only” you consent only to cookies that are needed for our websites to function properly. You can also visit Cookie Settings to provide a controlled consent.
Necessary cookies onlyAllow all
Cookie settings
Cookie settings

Select the categories for which you allow the use of cookies. Some are necessary to help the website work properly and are always enabled.

Necessary Always Enabled
Necessary cookies are absolutely essential for the website to function properly. This category only includes cookies that ensures basic functionalities and security features of the website. These cookies do not store any personal information.
Functional
Functional cookies help to perform certain functionalities like sharing the content of the website on social media platforms, collect feedbacks, and other third-party features.
Analytics
Analytical cookies are used to understand how visitors interact with the website. These cookies help provide information on metrics the number of visitors, bounce rate, traffic source, etc.
Advertisement
Advertisement cookies are used to provide visitors with relevant ads and marketing campaigns. These cookies track visitors across websites and collect information to provide customized ads.
Others
Other uncategorized cookies are those that are being analyzed and have not been classified into a category as yet.
Save & Accept
Powered by